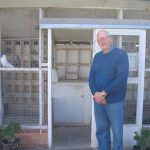 Recently I had the pleasure of visiting one of the true gentlemen of pigeon racing, Mr. Stan Prior.
Stan races with the Regent Club, in the VRPU.

He built his first pigeon loft, a modest 2 story building that housed approximately 25 racers with the stockies being in the bottom section, in the backyard of his parents home in Thornbury , when he was just 17 years old, in 1942. He attributes his introduction into pigeon racing to a fellow that used to live down the street from him when he was a boy, Mr. Jack Giddens, he became Stan’s mentor.

He would spend a lot of time there watching him with his birds and on race day.
Jack used to tell Stan something that has stuck in his mind, invaluable words, they were “You might as well throw your money down that drain there (pointing to a grate over a drain in the back yard of his home) if your not going to do things properly”.

He raced with the Northcote Club which was then part of the VHA.

Stan raced pigeons through the years during the war. Due to this and petrol rationing they were not allowed to race pigeons out of the state, so the furthest they could race one year was Mildura.

He remembers transporting the pigeons in vehicles that carried their own gas producers, burning fuel along the way to produce their own gas.
He and his fellow Northcote club members were at this time given 10 rings each to breed pigeons for the Australian Army to help the war effort. Although he never knew where these birds ended up.
He raced for a period of three years, until his marriage to his wife Betty.

Stan and Betty then took up residence in Reservoir, in a house they have lived in for 60 years.
Stan returned to pigeons in 1965, when his son Greg was just 13 years old. He came home one day and asked his dad if he could race pigeons.

Stan’s back garden is very spacious and could accommodate a pigeon loft very adequately.
They were laying the slab in the backyard, when a friend came round and asked “What on earth are you doing?”
“We are building a pigeon loft, Greg wants to race pigeons” was Stan’s reply..
“What ever for” was his friends reply “he is on 13 years old, he might get sick of them!”
To which Stan answered “Well he might … But I won’t!”

The friend was none other than Ray Boyne, who was responsible for the famous grizzles that Stan used to race.

Greg became a very dedicated pigeon fancier too. He would take over the training and tending of Rays pigeons when he was busy with work commitments and would clock for him regularly.
Stan has won 5 feds with the “Boyne” grizzles, including 2 “Produces” in 1977 & 1979.
The list of Fed positions that Stan has gained over the years are too numerous to mention. But one that truly stands out in his mind is when he won a Tassie Fed by two hours, a formidable feat even by today’s standards.
Stan was the Secretary of the VRPU for a total of 17 years and still remains as club secretary of Regent, a position he has held more recently for the past 8 years. He still wears to this day, a watch that he was presented with when he won the “Yooralla” race from Cobar in 1981. ( The Yooralla race was a special ring race-with-in-a-race, conducted by the Fawkner Club) He won the Fed this race too.
When I asked Stan what he thought was the most concerning thing was about the sport today, he replied that it was the lack of youngsters coming into the sport.

I also asked him if he could pass on what he considered to be the most valuable piece of advice to anyone starting out. He said “Always keep to the same routine, they are creatures of habit and like routine”.

His ultimate goal these days is to be able to win his favourite event the 500 mile race.
I asked Stan what is the first thing he does when he gets up in the morning…he says that now he has his breakfast first. When in days gone by it used to be out to the loft. He is a lot more relaxed in his approach to his birds these days, as now he is “getting older.” Gone are the days when he used to be up at 5 am to toss the birds, now he tosses twice weekly sending his birds on most occasions with VHA flier John Brislin. He has changed his loft to a fly in now rather than a landing board, as he finds this easier to handle.

He is a peas and maize man, he doesn’t use any commercially mixed feeds, and has only just recently in the last couple of years introduced barley into the feed.
He traps his birds into plain safflower on race day , with a multi Vitamin mixture in their water. He does give them a Glucoden mixture on basketing day.

He doesn’t believe in any medication cocktails and will only treat if absolutely necessary.
Mr. Stan Prior is a well respected member of the VRPU- and a True Gentleman of the Sport.